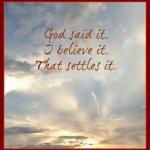 Not long ago, I found myself involved behind the scenes in a squabble between the chair of my department and another department colleague. Their disagreement was about the proper interpretation of the Faculty Handbook on an issue related to my colleague’s upcoming promotion case. Both asked me, as a former department chair, to offer my opinion. I felt that my colleague’s interpretation, based on a charitable “spirit of the law” reading of the relevant portion of the handbook, made more sense than my chair’s more rigid “letter of the law” interpretation.

“Originalism” has been part of the conversation about the U. S. Supreme Court for most of my life, particularly while Antonin Scalia was on the bench. Scalia, who died in 2016, was an eloquent and forceful advocate of originalism; SCOTUS nominee Amy Coney Barrett, a former clerk for and a protégé of Scalia, has made it clear that she intends to interpret the law from a originalist position if she is confirmed.

With regard to the U. S. Constitution, originalism requires that a judge ask questions such as “What was the writer’s original intent?” and “What would reasonable people at that time have understood this text to mean?” Advocates of originalism strongly emphasize the difference between judges and legislators and are particularly concerned to root out judicial activism. They contend judges should strive to apply the law as they find it, focusing backward on text, structure, and history, nor forward on their moral convictions or the policy consequences they consider best for today’s society. Scalia defined it this way: “The Constitution that I interpret and apply is not living but dead, or as I prefer to call it, enduring. It means today not what current society, much less the court, thinks it ought to mean, but what it meant when it was adopted.”

Scalia’s definition positions originalism in opposition to a “living document” approach. In this understanding, a document’s meaning and application is intended to change and grow within identifiable parameters as each generation’s new issues and concerns arise. The “originalism vs. living document” debate often falls into familiar conservative vs. liberal political categories, in which originalists advocate a narrow use of history and reading of the text in order to push back against the perceived liberal tendency to make the text “relevant” and update it to contemporary concerns.

The term “originalism” was coined in the 1980s; constitutional scholars have been interested, among other things, in understanding why this interpretive strategy has become so influential in the U.S., particularly since originalism has little or no influence in other constitutional democracies with similar legislative and judicial histories to the United States, countries such as Canada and Australia. In a recent interview with the New Yorker, Harvard historian Jill Lepore listed a few reasons suggested by scholars for the strong influence of originalism in this country. One particularly caught my attention. Originalism arose in the United States because of the unique historical influence of fundamentalist Protestantism on this country’s history and development—an influence missing both in Canada and Australia.

I was born into the fundamentalist Protestant world that Lepore references, and I am thoroughly familiar with how they read their sacred text. I was taught that the Bible is the inerrant and infallible word of God, dictated by divine inspiration to specially selected human beings, then assembled into the Word of God that we call the Bible. The Bible is God’s final word to us, I was taught; all the guidance a Christian needs to live a life pleasing to God can be found between its covers. Many of the vehicles in our church parking lot sported a bumper sticker expressing the appropriate attitude toward Scripture: “God Said It. I Believe It. That Settles It.”

Lepore points out that there is a great deal of similarity between how fundamentalist Protestants treat the Bible and originalists treat the U. S. Constitution. In both cases, the text is a special document that must be treated with the reverence and care that it deserves. Join that conviction with the belief among many conservative Christians in this country that the founding fathers were divinely inspired when they wrote the seminal texts of the United States of America, and originalism becomes a familiar interpretive strategy. Originalism is attractive to many Americans because they are accustomed to treating important texts with deference, even reverence.

The parallels between originalism and fundamentalist Protestantism also provide reasons to be suspicious of both strategies of interpretation. It is worth remembering, as Lepore points out, that the founding fathers themselves were not originalists by any stretch of the imagination. They wanted to break sharply with tradition; the Declaration of Independence includes a litany of injuries caused by the king, deliberately intending to set history aside in exchange for creating something brand new. The last thing on the framers’ minds was to bind future generations of citizens with documents that would not and could not grow and evolve.

A parallel case can be made with regard to Scripture. Christians often forget just how earthshaking and groundbreaking the message of the Gospels truly is. The reported words of Jesus tell us much about how to continually grow and change while following Him; at the same time, Jesus is frequently critical of attempts to rigidly apply what we believe God said in the past to new situations and circumstances. As soon as words of life are treated as fixed and unchanging, doctrine and dogma become substitutes for a faith intended to fruitfully engage with a changing world. Just as Jesus was a living, breathing human being, so the faith that grows from following him should also live and breathe. That means it should never stop being open to change.

One Sunday evening many years ago, I heard a Baptist minister, a family friend and the godfather of my firstborn son, say something shocking from the pulpit. He lifted his well-worn Bible above his head with his right arm and said in a loud voice: “This is not the Word of God!” Gasps filled the sanctuary, followed by an uncomfortable silence. After a dramatic pause of several moments, he continued. “This is just ink on paper between leather covers. This becomes the Word of God when the Holy Spirit makes it so to each of us individually.”

My son’s godfather was right. The divine word changes and grows in each of us, often in apparent conflict with what we thought was already fixed and settled. When temptations arise to find security and safety in inflexible interpretations of important texts, whether the Constitution or Scripture, it is worth taking the words of Paul to the church at Corinth to heart: “The letter kills, but the Spirit gives life.”