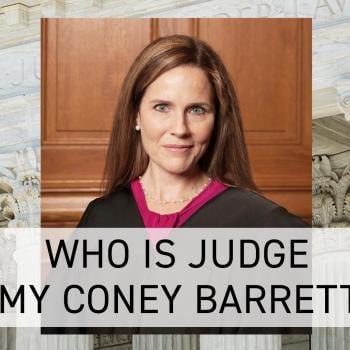 OCTOBER 2, 2020 BY FREEDOM FROM RELIGION FOUNDATION

Yes, we’ve been recently busy with Amy Coney Barrett here at the Freedom From Religion Foundation, but, no, we haven’t let her monopolize our attention.

We correctly guessed that Barrett would be President Trump’s Supreme Court nominee and our Strategic Response Team had an incisive dissection of her record all ready to go out as soon as the choice was leaked last Friday evening. “This is the legal fight of the century for America.” said FFRF Co-President Annie Laurie Gaylor. We’re calling on you all to ask your senators to strongly oppose this nominee and to delay confirmation hearings until the next session of Congress. In a lengthier follow-up, we further probed into her background. “Amy Coney Barrett is unfit for any federal judgeship and absolutely is unfit to serve on the Supreme Court,” we concluded.

We scrutinized her in a number of blogs, too. Annie Laurie warned that the erosion of reproductive rights occurring in countries such as Poland could happen here, too — especially with Barrett on the Supreme Court.

“Let’s learn a lesson from Poland,” she urged. “Demand that your senators delay the nomination vote until after the inauguration. Call, email, speak up.”

“She’s a fervent Roman Catholic who belongs to a charismatic fringe clique, People of Praise, whose members reportedly babble ‘the tongues’ like Pentecostals,” veteran freethinker and writer Jim Haught revealed. “Various researchers say that this kooky practice has spread so much that one-fourth of all Christians around the world are tongue-talkers.”

Our Facebook Live “Ask an Atheist” episode this week was expectedly devoted to a discussion of Barrett. FFRF Legal Director Rebecca Markert and FFRF Director of Strategic Response Andrew Seidel spoke with Andrew Torrez, an attorney, podcast host and friend of FFRF, about the nomination — and the impropriety of filling an open Supreme Court seat during an election.

Our lawsuit against Alabama’s religious voting registration
In spite of our focus on Barrett, we engaged in a number of other important activities. We filed a federal  lawsuit Thursday against an outrageous religious Alabama voter registration requirement, garnering a good amount of media attention in the process.

“A secular advocacy group has filed a federal lawsuit challenging a voter registration form in Alabama, arguing the state violates the constitutional rights of applications by requiring them to declare ‘so help me God’ when signing up to vote,” the Religion News Service reported. “The Freedom From Religion Foundation filed the lawsuit on Thursday (Oct. 1) against Alabama Secretary of State John Merrill, alleging that since Alabama’s form does not offer a secular alternative to “so help me God,” it infringes upon the rights of voters.”

For other coverage of our suit, check out the pieces here and here (or listen to Freethought Radio’s interview with FFRF Senior Litigation Attorney Patrick Elliott about the case).

Why is our work important?
And the media expressed curiosity in our work more broadly. Dan and Annie Laurie were interviewed on a Kansas community radio station recently, where they explained why they are atheists and why FFRF aims to remove all ties between government and religion.

We also rated international coverage — a fabulous write-up about FFRF, the Congressional Freethought Caucus and the U.S. freethought movement in Quebec’s daily newspaper Le Devoir, with a major sidebar interviewing the fascinating Ron Reagan about his nonreligious views and why he recorded a major TV spot for FFRF. (We’re also linking to an imperfect Google translation of the stories here and here.)

A Bluegrass victory
We had a recent victory for church/state separation worthy of a bourbon toast. A school district in the Bluegrass State pledged to us that it won’t have prayerful graduation ceremonies in the future. “I have had the opportunity to review your attached letter and wanted to let you know that I have advised the principal to refrain from religious prayer at future graduations,” the district’s legal counsel emailed us.

A double musical treat
We have a double treat for you this Sunday on our “Freethought Matters” TV show in the form of interviews with two stellar jazz artists with unusual freethought back stories. Addison Frei and Tahira Clayton are well-known jazz musicians in New York City — and newlyweds. You can already catch the show on our YouTube channel. Or find out where you can watch it on Sunday.

Whether it’s mobilizing you over a Supreme Court nominee or entertaining you with freethinking performers — you are the reason we do all that we do.