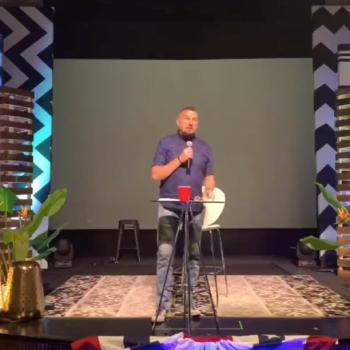 During a Sunday service on July 5, Rock Urban Church in Grandville, Michigan showed the congregation a video promoting a number of QAnon conspiracy theories that include the idea that COVID-19 is part of some Democratic plot to ruin Donald Trump‘s presidency and that George Floyd‘s murder was staged.

Most of the messages in the video appear to be inspired by, if not pulled directly from, the rapidly growing QAnon conspiracy, which alleges that a vast cabal of politicians, wealthy billionaires and media pundits are pulling America’s strings for their own covert ends when they’re not trying to avoid being exposed by Trump, who is thwarting their plans behind the scenes.

You would think Christians who claim to care about the truth would at least try not to promote obvious conspiracies… Imagine being so gullible, so emotionally immature, and so childishly petulant that you reject the findings of epidemiologists, serious journalists, and eyewitness accounts but fully accept whatever QAnon message boards feed you. Why would anyone take this church seriously when this is what they’re pushing?

Meanwhile, the church remains a tax-exempt non-profit even though it’s clearly telling its congregation how to vote. That may be an even bigger problem.