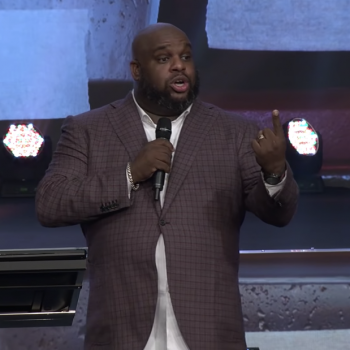 I’m not surprised that conservative Christians have lashed out at rapper Lil Nas X over the “Satan Shoes” he’s promoting (created by the company MSCHF). Given that the entire point of the shoes was to go viral — and not to make any kind of theological argument — the critics fell right into the trap of giving the shoes and the company free promotion.

But it’s downright hilarious to see who’s doing the criticizing.

Consider preacher John Gray, who posted a rant on Instagram yesterday about the shoes:

… They’re selling for a particular amount which coincides with a Scripture reference… [The shoes are] a direct affront to believers, a disrespect and dishonor to people of faith during resurrection week…

I defy the devil who’s trying to snatch a generation, and the silence of the church because of fear is not okay with me! I’m not okay with it…

It would be a hell of a lot easier to take his rant seriously if Gray wasn’t famous for buying expensive shoes — and spending lots of money on extravagant items — that many Christians would say goes against anything Jesus ever preached.

Remember that Gray is a walking talking preaching meme outside his Christian bubble for his ostentatious displays of wealth, including buying his wife a $200,000 Lamborghini and living in a $1.8 million home funded by his Relentless Church.

Of all the people upset with Lil Nas X over these shoes, it shouldn’t be the guy whose entire career has been devoted to ignoring everything Jesus ever said about money.

By the way, Nike announced yesterday it would be suing MSCHF for using its shoes (with the company’s swoosh logo), saying that they would cause “confusion and dilution and create an erroneous association between MSCHF’s products and Nike.” Whether or not they win, this is the Streisand Effect in action.