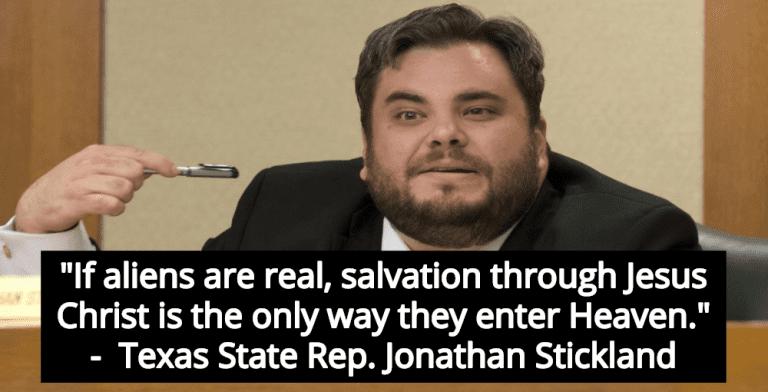 Twilight Zone: Texas lawmaker Jonathan Stickland claims if extraterrestrials exist, they must accept Jesus if they want to enter heaven.

A Texas state representative alienated many Twitter users Friday with his comments on extraterrestrials.

After The New York Times posted a story about the Pentagon’s Unidentified Aerial Phenomenon Task Force,  Republican Rep. Jonathan Stickland suggested that if ETs exist, they will need extra help if they want to get to heaven.

Texas State Rep. Stickland, who made headlines last year after calling vaccines “sorcery,” issued a bizarre statement via twitter earlier this week claiming “if aliens are real, salvation through Jesus Christ is the only way they enter Heaven.”

As one might imagine, Stickland was mocked by many for his ridiculous claim:

Last year, Stickland, a self-described “Christian Conservative Liberty Loving Republican,” made headlines after calling vaccines “sorcery” while claiming “only the lord God almighty is in control.” At the time the Texas lawmaker was attacking a medical doctor for advocating for the vaccination of children. At one point in his rant Stickland declared:

Parental rights mean more to us than your self enriching ‘science.’

In essence, Stickland was arguing that children should be considered property, and that parental rights trump “science,” which he puts in scare quotes.

When called out for his ignorance by a microbiology company, an angry Strickland seemed to deny that science saved lives, instead arguing:

Only the lord God almighty is in control… Repent!

I believe marriage is between a man, a woman, and God.

Previously Strickland authored a bill “that would have forbidden state or local governments from using public funds to issue same-sex marriage licenses.”

Bottom line: Texas lawmaker Jonathan Stickland claims if extraterrestrials exist, they must accept Jesus if they want to enter heaven.