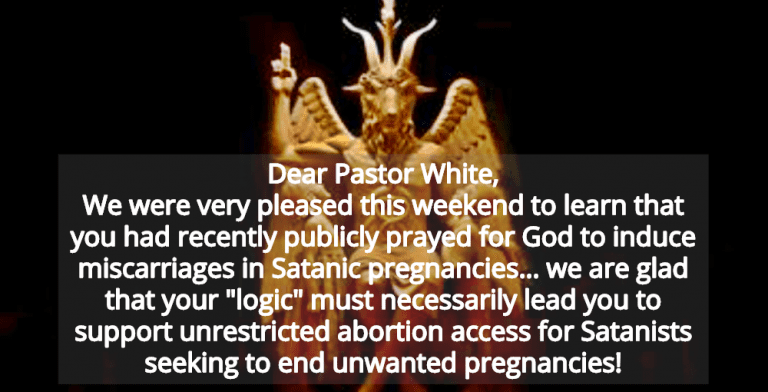 In an open letter to White, Lucien Greaves, Co-founder and spokesperson for The Satanic Temple, expressed their pleasure with the fact that White recently declared:

We command any satanic pregnancies to miscarry right now.

Indeed, in a bizarre rant captured by Right Wing Watch, White “takes authority over the marine kingdom, the animal kingdom, and all ‘satanic pregnancies’ that seek to harm Trump or the church.”

Presidential spiritual adviser Paula White takes authority over the marine kingdom, the animal kingdom, and all “satanic pregnancies” that seek to harm Trump or the church.71511:10 AM – Jan 24, 2020Twitter Ads info and privacy1,367 people are talking about this

We cancel every surprise, from the witchcraft… any spirit of control, any Jezebel… We come against the marine kingdom, we come against the animal kingdom… we break the power in the name of Jesus… We command any satanic pregnancies to miscarry right now.

In the letter Greaves states:

Greetings from The Satanic Temple (TST)! We were very pleased this weekend to learn that you had recently publicly prayed for God to induce miscarriages in Satanic pregnancies. At a time in which Satanists have had to fight desperately to retain their bodily autonomy in the face of increasingly restrictive anti-abortion laws, we are glad that your “logic” must necessarily lead you to support unrestricted abortion access for Satanists seeking to end unwanted pregnancies!

I am writing to ask you to take a bolder step in the name of your faith, and lend your support to our Religious Reproductive Rights campaign which seeks to invoke religious exemptions from abortion restrictions on behalf of Satanists.

After stating a great deal of pertinent facts concerning a woman’s right to choose, the letter concludes by thanking White for her support:

It was a true relief to all of us at The Satanic Temple to see you in particular defending our health care rights, as we know that you will put your substantial fortune where your mouth is…

You may send a check directly to our headquarters…

The Satanic Temple is a nontheistic religious and political activist group based in Salem, Massachusetts. The Temple is recognized as a church for the purposes of tax exemption, with chapters in 13 states and Canada.

For the record, the Satanic Temple does not promote the worship of Satan, or any other imaginary deity. Instead, the group utilizes satanic imagery to promote egalitarianism, social justice, and the separation of church and state.

The Satanic Temple is a faith community that describes itself as facilitating “the communication and mobilization of politically aware Satanists, secularists, and advocates for individual liberty.”

Previously the Satanic Temple made headlines after offering to escort Muslims who were afraid to leave their homes out of fear of a growing anti-Muslim backlash resulting from the Paris terrorist attacks.

In addition, the Satanic Temple has been on the front lines in defending a woman’s right to an abortion and promoting the separation of church and state guaranteed by the First Amendment to the U.S. Constitution.

Also, it is worthwhile to note that when it comes to morality, the Satanic Temple’s Seven Tenets are morally superior to the Bible’s Ten Commandments.