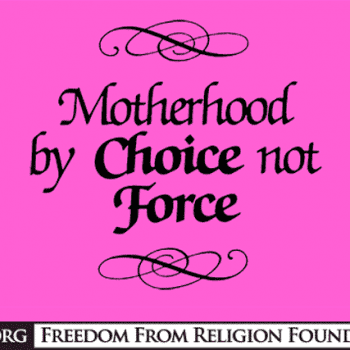 MARCH 1, 2021 BY FREEDOM FROM RELIGION FOUNDATION

The Freedom From Religion Foundation applauds a recent move by the New Mexico Legislature to annul a 1969 state statute criminalizing abortion.

On Friday, Feb. 26, New Mexico Gov. Michelle Lujan Grisham signed into law Senate Bill 10, remarking: “Anyone who seeks to violate bodily integrity, or to criminalize womanhood, is in the business of dehumanization. New Mexico is not in that business — not any more.”

So, the increasingly hostile federal judiciary makes it more important than ever for states to reverse anti-abortion statutes still on their books — as well as pass to legislation that protects abortion rights. Although Roe v. Wade has made abortion a constitutional right throughout the United States since 1973, 20 states have statutes that would ban abortion if Roe v. Wade were repealed, likely throwing the question of abortion rights back to individual states. In fact, eight of these states still have abortion bans that predate Roe. (FFRF’s home state of Wisconsin is one of those states with a draconian pre-Civil War anti-abortion statute still on the books that would imprison physicians providing abortion care.)

Abortion bans are based on ideology and rooted in religion — not science. Abortion is a safe, effective procedure with complications resulting in less than one quarter of 1 percent. The U.N. Human Rights Committee asserts that abortion is a human right and research shows that limiting or restricting abortion results in poor maternal health outcomes. Secular nations should use science to guide health care legislation, and abortion care is no exception.

The New Mexico Legislature has taken a significant step by repealing a statute that, as its governor put it, criminalizes womanhood. Other states harboring archaic anti-abortion statutes must follow suit as quickly as possible.

ABOUT THE AUTHORBarbara Alvarez is from Madison, Wis., and attends the University of Wisconsin-Madison, working on a Ph.D. in library and information sciences with a minor in gender and women’s studies. Alvarez was a major winner in last year’s FFRF essay competition for graduate students, writing about the bible’s role in the abortion battle. She is FFRF’s first Anne Nicol Gaylor Reproductive Rights Intern, a program set up to memorialize FFRF’s principal founder, who was an early abortion rights activist and author of the book Abortion is a Blessing.

Famine in the Bible is more than a curse: It is a signal of change and a chance for a new beginning