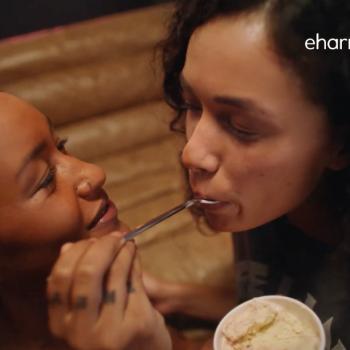 There was a time when the dating website eHarmony, founded by a conservative Christian, wouldn’t allow gay people to find matches. After a lawsuit, a separate-but-equal website, and all kind of internal machinations, the site now permits searching for same-sex partners.

That’s the focus of a recent ad featuring a lesbian couple kissing and sharing ice cream while the voiceover says the website is “Here for Real Love.”

It won’t surprise you, then, that the one conservative Christian mom at One Million Moms (Twitter count: 4,200) says the ad “brainwashes” people of all ages.

This eHarmony ad brainwashes children and adults by desensitizing them and convincing them that homosexuality is natural, when in reality it is an unnatural love that is forbidden by Scripture just like love rooted in adultery is forbidden.

Homosexuality is unnatural and immoral. Romans 1:26-27 makes this very clear.

Nothing says “we’re the moral ones” like a Christian mom who claims those women in the ad deserve to be executed — since that’s what Romans 1 goes on to say.

OMM’s Monica Cole wants the website to cancel the ad, and she’s urging people to sign a petition declaring that eHarmony won’t “remain neutral in the cultural war… by pushing the LGBTQ agenda on families.”

Apparently her definition of being “neutral” is demonizing same-sex couples. Because Monica Cole and people like her are horrible human beings with no compassion or decency. An ad promoting love makes them sick. The petition tells you a lot more about the moral bankruptcy of Cole’s faith than any supposed problems with a same-sex relationship.