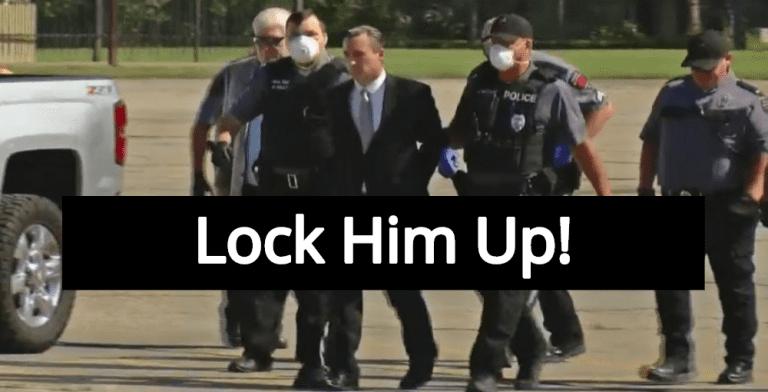 Lock Him Up! Pastor Tony Spell of the COVID-19 defying Life Tabernacle Church in Louisiana has been arrested for aggravated assault after threatening a protester with a church bus.

A Louisiana pastor who has defied state orders against large gatherings was arrested on Tuesday for allegedly backing his church bus dangerously close to a protester.

Tony Spell of Life Tabernacle Church in the city of Central, near Baton Rouge, was charged with aggravated assault in connection to the incident that was caught on tape, police said.

Graham Ulkins, a reporter for WAFB 9 News in Baton Rouge, posted footage of the arrest on his Twitter feed: Graham Ulkins✔@GrahamUlkins

After being cuffed, arrested, and charged earlier today, Spell posted a $5,000 bond and has since been released from police custody, according to a report via TMZ.

Earlier this week, Progressive Secular Humanist reported that a member of Spell’s church is dead from the COVID-19 virus after the notorious Life Tabernacle Church in Central, Louisiana, refused to honor coronavirus stay-at-home guidelines.

Spell responded with anger and denial when confronted with the news that one of his members had died from the virus. Speaking to WAFB about their report, Spell declared:

That is a lie.

Spell has become a controversial and much despised figure after refusing to close his megachurch despite the clear and present danger COVID-19 presents to his congregation and the larger community of Central, Louisiana.

In addition to the confirmed death, another report released earlier today finds that Spell’s attorney, who also attended Spell’s church services despite the stay-at-home guidelines, has been hospitalized after testing positive for COVID-19.

Previously, Pastor Spell made headlines after defying COVID-19 guidelines and filling his church with hundreds of people for Easter services.

Satan and a virus will not stop us. God will shield us from all harm and sickness. We are not afraid.

Apparently God forgot he was supposed to “shield” church members from “all harm and sickness,” and now the dominoes are beginning to fall.

Bottom line: Pastor Tony Spell of the COVID-19 defying Life Tabernacle Church in Louisiana has been arrested for aggravated assault after threatening a protester with a church bus.

The Christian Conspiracy: In Pursuit of Truth