Why Won’t Evangelicals Get the COVID Vaccine? 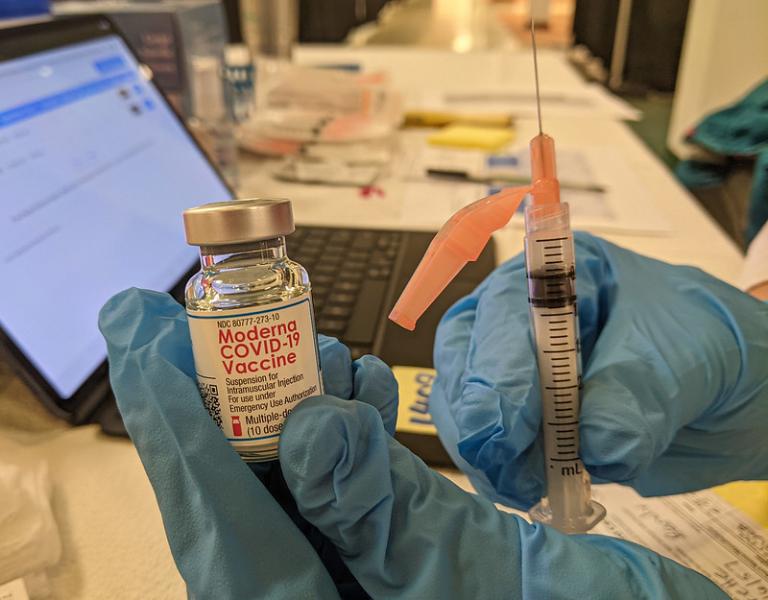 We got very lucky in our quest for a coronavirus vaccine.

The mRNA approach, untried in humans until now, worked spectacularly well. It yielded two vaccines with 95% efficacy on the first try – like hitting a home run in your first at-bat. Pfizer and Moderna’s vaccines were soon joined by a third, made by Johnson & Johnson with conventional techniques. Combined with a Democratic Congress and a competent administration that’s rolling the vaccine out rapidly, smashing the 100-million-shots-in-100-days goal, there’s a real chance we could put the pandemic behind us by summer.

The critical figure for ending a pandemic is “R0” – the average number of new people that every sick person infects, a measure of how contagious a disease is. The higher R0 is, the more people need to be immune to stop it from spreading. The R0 of the coronavirus is between 2 and 3, which means that the threshold of herd immunity is 60-70% of the population. If we achieve that, R0 drops below 1 – each sick person infects, on average, fewer than one other person – and the virus goes extinct.

(As proof that masking, distancing and other precautions work, observe that influenza, which has a lower R0 than COVID, has been virtually wiped out this season. This is one of the great public-health triumphs of history, even if it’s overshadowed by the pandemic.)

However, there’s a bump in the road. To reach the high threshold of herd immunity, we need everyone to cooperate. If any large demographic refuses the vaccine, it will be near-impossible to wipe the virus out.

In this context, you may have heard that public-health experts are concerned about vaccine hesitancy in Black communities. There’s an understandable history of distrust, stemming from the Tuskegee experiment and other shameful episodes in which people of color were used as guinea pigs by medical authorities. However, there’s good news on that front, as polls have shown that Black people’s willingness to get the vaccine has risen rapidly.

A new Pew Research survey suggests that either the campaigns were effective or the worry was misplaced: 64% of Black Protestants, the researchers found, “definitely or probably” plan to get vaccinated — up sharply from November when little more than 40% said they planned to get vaccinated.

It’s not that vaccine hesitancy is a myth; it’s merely strongest among another group: white evangelical Christians.

A religious breakdown of the survey conducted in February of 10,121 U.S. adults shows that only 54% of white evangelicals “definitely or probably” plan to get vaccinated.

I once wrote that anti-vax ideology is a truly bipartisan delusion, but there are signs that this could be changing. There’s a big partisan gap in vaccine uptake, with polls finding that between a third and a half of Republican voters don’t want the shot. (This shouldn’t be surprising, since the Venn diagram of white evangelicals and Republicans is basically a circle.)

The biggest reason for this is partisan polarization. Trump lied, denied and downplayed the threat of COVID-19 because he knew it would hurt his reelection campaign, and Fox News played along, spreading pseudoscience and urging viewers to ignore health precautions.

Right-wing evangelicals, who worship at Trump’s altar, swallowed this propaganda and made the virus a culture war issue (to the point of public mask burnings!). To get the vaccine now would be like admitting they were wrong all along, that Trump lied to them and the virus really was a danger. It’s sadly unsurprising that they’d rather cling to a comforting self-delusion, even at the cost of their health and lives.

A second reason is the general attitude of anti-science and anti-intellectualism among evangelicals. Again from RNS, quoting historian John Fea:

Fea said the distrust of science is related to their belief that God will protect them. “Getting a vaccine is a lack of faith,” as some evangelicals see it…

The leaders of the religious right spent a long time cultivating disdain for education and critical thinking among their flocks. They preached that faith should be trusted over facts and that the right ideological credentials were more important than expertise. Predictably, this led to conservatives running over a cliff into an abyss of conspiracies and magical thinking, of which QAnon is the latest and most prominent.

But reality, as the saying goes, is that which doesn’t go away when you stop believing in it. Evangelicals may distrust a vaccine designed by scientists who are outside their tribe, but that won’t keep them from spreading the virus, getting sick and dying.

As an aside, there’s one group that you’d expect to heed the advice of scientists – and we do:

The survey also showed that atheists and agnostics scored highest of all the religious groups in their willingness to get vaccinated.

Last but not least, white evangelical vaccine refusal may be tied to their worldview in another way. It has to do with their rejection of mutuality as a moral principle.

Getting a vaccine is a civic-minded act. It protects not only you, but everyone you interact with. It lessens the burden on hospitals and doctors and decreases community spread that endangers the vulnerable. In this way, it fits well into a liberal philosophy: we get vaccinated to help our neighbors, as well as ourselves.

But white evangelicals are far more likely to hold an atomistic, libertarian ideology which denies that we have collective moral obligations to each other. In this worldview, individuals are solely responsible for themselves. How others are affected by your actions is none of your concern. To those who hold this worldview, if they don’t feel threatened by the pandemic, there’s no reason to get vaccinated – period. Of course, it leads to a classic Prisoner’s Dilemma when everyone thinks this way.

I’m not especially worried that evangelicals are going to prevent us from reaching herd immunity. Even if they refuse the vaccine, they’ll still get immunity – the hard way. It just means that more of them will suffer and die needlessly.

You’d think that conservative leaders would want to avoid that outcome, out of raw self-interest if for no other reason. Many of their followers are elderly and in poor health to begin with, and every one who dies lessens their power and influence.

But rather than counseling prudence and safety, the power brokers of the religious right are urging their followers on in their self-destructive denialism. It appears there’s nothing they won’t give up for the sake of spiting liberals, including their own lives.