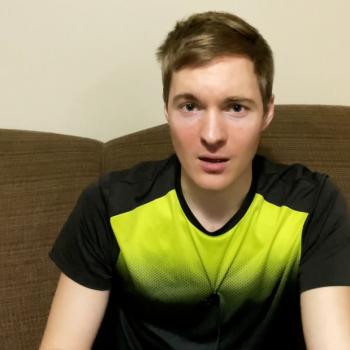 Matt Powell, the hate-preacher and Creationist who appears to have dedicated his life to making atheists look smart, has done it again. Fresh off of his humiliating video claiming scientists believe in surfing monkeys, he’s now pretending dinosaurs farted themselves into extinction.

I know this because his latest video is called “Dinosaurs Farted Themselves Into Extinction.”

First some background: In 2012, researchers published a paper in the journal Current Biology suggesting that dinosaurs’ farts and burps contributed greenhouse gases into the atmosphere… which the scientists theorized could explain the warmer climate of the time.

There’s nothing in the paper about extinction. Like… at all.

But when FOX News and the Daily Mail reported on the study, somehow, extinction made its way into the articles. It’s not accurate. It’s just clickbait.

Here’s how Smithsonian Magazine reported on the study — and the subsequent media frenzy — days later:

[David] Wilkinson and co-authors didn’t say a thing about dinosaur extinction in their paper. Not to mention that the idea doesn’t make any sense. Titanic sauropods were around for about 130 million years. If their gases were so deadly, why did it take so long for the world to be overwhelmed? The Fox News gloss isn’t even a misrepresentation of what the researcher said. The story’s headline and lead are outright fabrications.

Now enter Matt Powell, the dumbest Creationist in the country. In his video, he not only perpetuates the FOX News lie misrepresenting the article, he goes even further and suggests the article undermines all of evolution.

… Take a moment to really let that sink in because here’s the thing: In schools across America, kids are learning this in colleges and universities, and they’re being taught this theory every single day.

And Hitler said if you tell a lie big enough, loud enough, and often enough, people will believe it. And people will often laugh at you for not believing in evolution, and they’ll mock you and say that you must just be too superstitious to believe in the facts but the truth is that they’re unfortunately the superstitious ones because anybody that believes that dinosaurs farted themselves into non-existence is putting trust in primitive superstition.

He seriously found a way to work Hitler into his video. Because of course he did.

Anyway, let’s walk through his chain of lies.

2) He suggests scientists take it seriously for the reason he claims — which they don’t.

3) He claims “evolution” teaches the dinosaur farting themselves into extinction theory as fact — which, besides being completely inaccurate, wrongly suggests scientific papers are all magically taught to schoolchildren the very next day.

4) He says the theory (which doesn’t exist) is a form of superstition that scientists accept — which is not how anything works.

And this, to him, represents solid research. He read a shitty article on FOX News from nearly a decade ago, assumed it’s perfectly accurate because he’s too dumb to recognize bullshit when it’s staring him in the face, and made a video implying he knows more about evolutionary biology than everyone who’s dedicated their careers to studying the material.

It’s the height of Creationist arrogance. And another reminder that the most ignorant people in the country always think they’re smarter than everyone else.