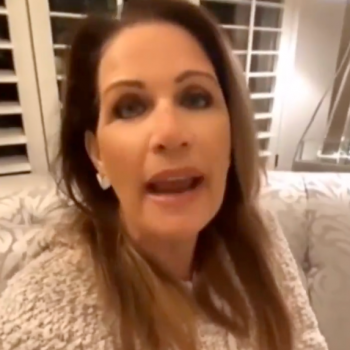 The usual brand of Trump-worshiping Christian sycophants were still at it last night, following the right-wing insurrection, falsely claiming that the siege of the Capitol was the result of left-wing agitators.

“The members I was with tonight are angry with President Trump tonight,” she said. “They are spouting the false narrative.”

Bachmann claimed without evidence that “paid rabble-rousers” had stormed the U.S. Capitol and said it was all part of a “coup.”

Evangelist Franklin Graham echoed the same lie but went even further, suggesting to Religion News Service that Antifa was to blame:

“They have a right to protest. To tell people to go home, it’s not for me to decide that. The people who broke the windows in the Capital did not look like the people out there demonstrating. Most likely it was antifa. For people busting windows, they need to go home. But for people standing out there peacefully holding flags, and protesting, they have every right to do that.”

We wouldn’t be having this discussion if people were just “holding flags.” They sieged the Capitol, egged on by Donald Trump, and Franklin Graham has spent four years defending Trump’s lies and corruption and pretending that every criticism of him is a form of anti-Christian persecution. He can’t even bring himself to denounce Trump when there’s violence and vandalism in his name being carried out by their shared supporters.

Franklin Graham is Christian Nationalism in a nutshell: He’ll do anything to enact a socially conservative agenda, using Jesus as a tool to accumulate that power, then ignoring everyone’s subsequent suffering. He doesn’t give a shit about the Capitol or democracy. He’ll gleefully set this world on fire because he believes he’ll be rewarded in the afterlife.

Pastor Robert Jeffress, who has been a regular on the FOX News circuit, didn’t go quite that far, but he still created a false equivalence between “Antifa” and “angry Republicans.”

The rioters were in D.C. for a Trump rally meant to overturn the election results. They went to the Capitol because Trump told them to do it. They broke in and destroyed things while Trump said nothing of substance. They believe the election was fraudulent because Trump — and other Republicans and right-wing media outlets — have perpetuated that lie for weeks, and even that comes after years of pretending they’re victims of persecution.

The rest of us live in reality. But those rioters, with tacit support from white evangelical Christians who have been telling their people for years that Trump and God are on the same side and a political loss may as well mark the end of their faith.