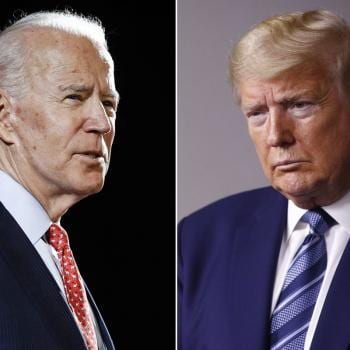 Recently, and I hope he won’t mind me saying this, but Jim Jones sent me a link of a news piece about children showing beautiful Halloween empathy and kindness with a comment that these children were showing more empathy than a person in charge of the United States, who at that stage had presided over the death of 230,000 citizens from the coronavirus. I read the article and his email and completely agreed, but didn’t think too much of it until I revisited it today in the context of the following video:

But the email contains a hugely important point. The role of leader of arguably the most important nation on earth requires one to be a strong person in many ways but what it shouldn’t exclude is the characteristic of empathy because empathy is crucial for morality. Without empathy, you don’t get morality.

Donald Trump is devoid of empathy. He has shown this time and time again from long before he was elected President and certainly in his role as President since 2016. I would argue that he is pathologically devoid of empathy and this would be connected to his characteristics of narcissism and sociopathy that I’m certain he has.

In simple terms, Donald Trump is a horrible human being. I really, genuinely mean this. I’m not saying this from a partisan point of view over a difference in politics, I’m saying this by point of fact that he has no empathy and his politics are politics of hate and division. He would have happier polarise the nation than unite it. We have heard from enough people close to him who have leaked an awful lot of stuff about him that we can get pretty good gauge on his moral character and fibre.

I’m going to take this one step further in claiming that anyone who supports or voted for Trump is also not a nice human being. Yes, they might be nice to their mother or take their friends out to dinner but in a larger, more universal sense of morality, they are not nice people. I say this because, in order to be a Trump supporter, you must also suffer from a lack of empathy. It’s that simple. You may not like hearing that, but there you go. I’m not talking about people who voted for the GOP because of some kind of consequentialism whereby voting for Trump was a means to an end in a very calculated manner. I’m talking about people who really like Donald Trump.

Whether it be children in cages, supporting those who are less fortunate than yourself, supporting policies that benefit everybody rather than those who are just like you, and so on, liking Donald Trump makes you not a nice person.

WHERE THE HELL IS HE?

Rage-tweeting from the White House, with the West Wing now apparently stinking of fast food, is not good enough. It’s the behaviour of an adolescent delinquent. People are dying.

Meanwhile, Rudy Giuliani is in charge of investigating fraud in the election and seeking the counsel of Steve Bannon.

Who is awaiting trial.

Now, you can justify all of this with whatever makes you be able to sleep at night, Trump supporter, but it doesn’t stop you being not a very nice person. Because you support a horrible person. Someone who is truly lacking in anything remotely resembling ordinary empathy. And empathy underwrites morality. So, Trump is devoid of anything approaching ordinary morality.

You may think that Joe Biden shedding a tear is evidence of weakness. But, especially given his strong  personal connections in the past with hospital ICUs, the man is showing empathy. And with empathy comes morality. And with morality comes good, humane politics.

Do you think that Donald Trump would visit the night shift at an ICU to deliver them meals and food? With Donald Trump show enough empathy to bring himself to actual tears, intuitively? Or even non–intuitively?

I will leave you with the next video, which utterly stunned me. This is the price that society has to pay for the seemingly calculated strategy and campaign of disinformation that Trump and his acolytes are sustaining. They are fanning the flames of truth decay and this is what you get. He should be fundamentally ashamed of himself. But to experience that emotion, he would have to have self-awareness, empathy and a strong sense of morality.