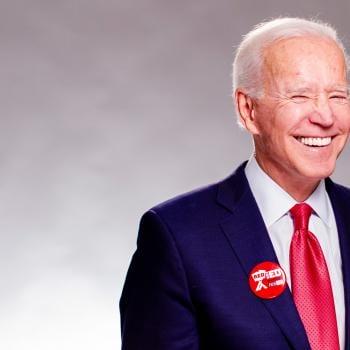 Party. I have no qualms expressing such. I find it hard to believe that professing Christians could even find this topic worthy of debate. Per Scripture’s own stance on the evil of abortion and sexual licentiousness, these issues really are about as black and white as they can get. There is simply no room within the historic Christian faith to disagree. What we are dealing with then is a simple rejection of these issues as matters of primacy.

There are a few common objections I hear from people who wish to leave room for professing Christians to vote for a Democrat. The majority of opposition comes from a negative apologetic against the Republican Party rather than earnestly assessing the Democratic Party’s platform. In other words, it is an exercise of many “whataboutisms” that invariably suggest the Republican Party is not an option for Christians either, largely based on a negative apologetic against Donald Trump. Prior to touching on Donald Trump though, I would like to devote some space to the primary objections I have seen others lobby against those who wish to vote for Republicans.

The first of which is that the Republican party has done little to effectively deal with the problem of abortion. Many will claim the entirely of the party uses abortion as the proverbial mealworm dangling from the hook for Evangelicals—and while this is partially true, I simply don’t believe it is a faithful representation of the entirety of the party. Undoubtedly, there are politicians who will use any and all means to keep their voting base, yet there are also godly men and women within the Republican party who desire to make legitimate changes on these issues and have in fact proven themselves to be consistent on these issues.

What this entails then, is more of a philosophical difference in how to approach ending abortion in what is known as incrementalism vs. abolition. Those in favor of total abolition don’t agree with the political approach of incrementalism, which is the slow process of changing legislation that makes procuring abortions at certain stages more difficult. Those in favor of total abolition desire the process of ending abortion to be effective immediately; those in favor of incrementalism tend to favor a more pragmatic approach that believes a complete, immediate overturning of Roe V. Wade is neigh impossible. Both desire the same end though—and this is important for us to keep in mind (I say this as an abolitionist). This is, however, where we must keep the voting records of those seeking office in the forefront of our minds. If they are soft on these issues, we ought to be choosing candidates who will consistently uphold Biblical values.

A second objection that is often leveled is that the Republican party is not truly pro-life because of their policies concerning immigration, warfare, welfare, the death penalty, and the like. Much of this stems from an inconsistent understanding of what Scripture actually teaches on these matters. Suffice it to say, there is nothing inherently wrong about border control, there is such a thing as a just war, the death penalty is perfectly consistent with the biblical witness, and things like the welfare state are at odds with the responsibility of the recipient (2 Thess. 3:10). This is not to say that such things shouldn’t be called into question when one is not upholding Scriptural precedent in the exercise of such policies. Perhaps more to the point though is calling into question that somehow, supporting candidates who advocate for open borders, pacifism, and no death penalty—who promulgate abortion up to birth is more pro-life? This is completely asinine and should be treated about as seriously as a serial adulterer’s marriage advise.

The third objection I often hear regards the character of the men in office, like Donald Trump. Here I really have no disagreements with the fundamental proposition. Character does actually matter. It is true that people are not voting in a pastor, and therefore the moral qualities of the man are not to the same expectations, but we have to reconcile with things the Lord detests in men (Pro. 6:16-19). There are many reasons one can seek to rationalize this principle away, but these are nonetheless things Christians are beholden to. What I find here is that many are willing to overlook character flaws (i.e. sins) for the sake of political expediency, which I believe will invariably lead to further concessions down the road. Once you set a precedent or trajectory that leaves exceptions on these things for political expediency, it is more than likely that such a line will continue to shift further as the choices in candidates continues to degrade.

A final objection is that one’s vote for an obscure candidate who you know will not win the election is a wasted vote. I firmly believe this is rather contrived nonsense meant to sway people toward voting for one of the two major parties in our nation. What’s worse than this is that I believe it is a binding of the conscience in a manner where there are various options which would leave room for one’s conscience to be exercised in a God-honoring way. What I mean by that is simply that while Scripture does indeed bind the conscience on several matters of morality (i.e. abortion, sexual perversions, character, etc.), it does not with respect to those who uphold Scripture’s ideals in these matters. More plainly: one can vote for any number of politicians who uphold the sanctity of life and the un-defilement of the marriage bed without being beholden to other, morally compromised candidates.

One might make an appeal to pragmatics here, but I simply don’t see how one can favor a blindly pragmatic approach to voting. The reason for this is simple: whether we like it or not, when we cast a vote for someone, we are giving tacit support for that individual as our representative. One can cast a vote for an individual without supporting everything that individual represents—that much is obvious. However, I don’t believe the line drawn between the two is as clear-cut as many wish it to be.

I have a decent amount of sympathy toward the one who votes for a candidate knowing they are morally repugnant, with the hopes that they will nonetheless effect policy changes for the good of the nation and especially the church. I disagree with this approach, but I understand it and am largely sympathetic towards it. The reason for this is that I believe there is a fundamental difference in asking what the greatest possible good is, as opposed to what the lesser of two evils is. In the former, one is actually making a calculated decision on the likelihood of what genuine good will come as a result of their vote, be it the Supreme Court choices, legislative policies that uphold biblical convictions, and the like. The latter is only concerned with making a less evil choice, and thereby, is concerned with having less evil come as a result.

The fundamental problem with focusing on pragmatics though is that it can just as easily be applied to one who wishes to vote for a Democratic candidate. I believe it to be incredibly misguided, uninformed, and convoluted—but it is nonetheless a valid logical conclusion if pragmatics is the primary ethical concern in mind based on a hierarchical system of ethics. Here though is where I find the fundamental divide in our current political discourse within the Evangelical church. People wishing to support the Democratic Party have elevated certain lesser moral concepts above others of a higher moral degree. Many are plainly ignoring that while all such moral issues must come into play—there are moral issues the Scriptures present as more immoral than others. You can’t get much stronger language than to specifically highlight particular actions as abominable and detestable. In this same breath though—there is a degree of difference to be plainly seen between one who commits 3 abominable deeds and the one who happily commits them all and aims to pass legislation enshrining the right for others to publicly flaunt abominable deeds. Surely, both are wicked, yet there is only one who wishes to sanction the national slaughter of babies, transition 1st-graders to the opposite sex, uphold sexual perversions in adults, condone violent “protests” and anarchy, strip away fundamental freedoms, continue to promulgate ideologies diametrically opposed to the Christian worldview (i.e. Critical Race Theory), embrace the tenets of radical feminism, and more.https://8e87a3c77660837ad20f97935632d17c.safeframe.googlesyndication.com/safeframe/1-0-37/html/container.html

There are practical implications one must consider here as well, especially when we are looking at the scale of evil and perversion built into the Democratic Party, which prides itself on these things as if they are virtues to be extolled from the rooftops. I do believe there are legitimate reasons one can vote a Republican ticket simply because there are men and women found within the party itself with a firm commitment to Jesus Christ. However, I don’t believe there are any legitimate grounds a faithful Christian can have for voting for the Democratic party. They have gone on record defending late-term abortion, the transition of first-graders to the opposite sex, and the normalization of sexual anarchy in adults as well. They have gone on record with explicitly anti-Christian policies and ideals. The political left has openly stated that men and women of faith are the dregs of society who need to be tried, convicted, and expunged from our society—all the while touting the need for tolerance for deviancy. These things are common knowledge at this point. There is simply no manner in which a faithful Christian can ignore such things.

As long as the Republican Party still holds men and women of a firm commitment to Christian ideals, there is conscionable grounds for voting for some of them. I write all of this, having voted for a viable third-party candidate in the 2016 election, and more than likely doing the exact same thing in the 2020 election. We are swiftly finding ourselves in the position of not having much of a political home that stands unabashedly for the Christian worldview. I believe there is a day coming where it may no longer be the case that Christians will be able to necessarily even vote for Republicans, but it must be stated unequivocally at this point: that day has long been had with the Democratic Party. It is not a party that stands in any way, shape, or form, for the cause of Christ. Again, this is not to say that the Republican Party does so unanimously. They don’t. This is also not to say one must vote Red to be considered a Christian.

However, it is to say, without qualms yet again: no biblically faithful Christian can vote for the Democratic Party. To do so reveals only two possible reasons: the first being that they are incredibly poorly taught. The second being they knowingly reject that Christians must be diametrically opposed to the rampant evil found within the Democratic Party because they have elevated other concepts to prominence that Scripture simply doesn’t. That this has to be said at this point is truly confounding to me—but you can’t be a Christian and give approval to deeds worthy of death, nor approval to men who sanction deeds worthy of death. You cannot be a Christian and support the evil that is abortion, homosexuality, transgenderism, nor any kind of gross immorality. This should not be a terribly difficult thing for professing Christians to agree on.

Trump and the Church’s Failing

If You Can Pray

Don’t Read the Constitution like Literalists Read the Bible