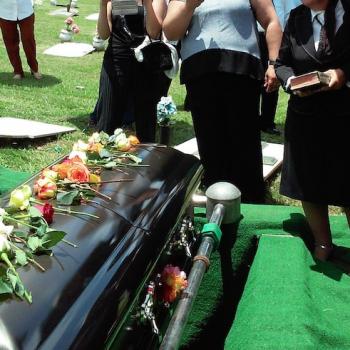 Recently I delivered a funeral message for a dear brother that unexpectedly passed away. He was a firm believer in Jesus Christ, and his funeral was a celebration of the life he lived for Jesus. In my sermon, I tried to spell out why Christians can hope in the resurrection and hope to see their fellow believers again one day in heaven. I pray this message will help give you strength as well in your faith in Jesus:

We are gathered here today to both celebrate and mourn, to laugh and remember, to weep and to rejoice. It reminds me of the ancient wisdom of King Solomon, who wrote 3000 years ago that there is nothing new under the sun. In Ecclesiastes 3, Solomon wrote this:

We are here to mourn and remember the life of our brother, but it is also a time of celebration and rejoicing because of where he is now: in heaven with his Savior Jesus. Death is the great equalizer, because it comes for us all. It doesn’t matter your ethnicity, education level or socio-economic status. Whether it’s young or old, death comes for us all, and for most of us it comes too soon. Even here in America, with all of the wealth and power and influence we’ve accumulated, we still haven’t found a way to escape death.

Questions naturally linger in our minds about death: what happens after death? Is there an afterlife? Where do we go? How do we get there? Solomon would write a short while later in Ecclesiastes 3:

I have seen the burden God has laid on the human race. He has made everything beautiful in its time. He has also set eternity in the human heart; yet no one can fathom what God has done from beginning to end. Ecclesiastes 3

We all have questions: about God, eternity, the afterlife. That’s just part and parcel of what it means to be human: we’ve been given a mind with an ability to ponder the deeper things, even if we can’t fully understand everything from beginning to the end. Christianity offers answers to some of the deepest questions of the human experience, especially the contemplation of death and what comes afterward. In fact, if you don’t consider yourself a Christian or perhaps you used to believe but you walked away, one of the most appealing parts of Christianity is our hope in the afterlife.

Because without that hope, if there is no afterlife, if this is all there is, then our brother is gone. If there is no afterlife, if all we have are the few short years on this chunk of rock hurtling through space, that can get pretty depressing pretty quickly. One of the greatest aspects of our faith is what we believe happens after death, because it fills us with hope. And by no means is it blind faith or wishful thinking. It starts with Jesus himself. In John’s eyewitness account of Jesus’ life and ministry, he records a conversation between Jesus and someone who had just lost a brother to sickness and death.

21 “Lord,” Martha said to Jesus, “if you had been here, my brother would not have died. 22 But I know that even now God will give you whatever you ask.”

23 Jesus said to her, “Your brother will rise again.”

24 Martha answered, “I know he will rise again in the resurrection at the last day.”

25 Jesus said to her, “I am the resurrection and the life. The one who believes in me will live, even though they die; 26 and whoever lives by believing in me will never die. Do you believe this?”

Jesus made a promise to Martha that not only was there a resurrection, but that Jesus himself was the resurrection and the life, and that faith in him would result in eternal life. It’s why this same apostle John, would go on to write the greatest summary statement in all the Bible:

16 For God so loved the world that he gave his one and only Son, that whoever believes in him shall not perish but have eternal life. John 3:16

Make no mistake, Jesus clearly taught that there was a resurrection, and the way to eternal life, to a life after this life, was through faith in him. This is what our brother believed. This is what he confessed. This is where he placed his faith and trust, in Jesus Christ as the Messiah, the Savior. Now, the skeptical might ask: sure that’s great to believe in, but what if it’s all a hoax? Where’s the proof?

That’s a legitimate question to ask because of what’s at stake. For our brother, he built his life around his belief in Jesus as the Messiah. It affected how he lived and interacted with others. It affected his time, because he spent so much time with God’s people. It affected his finances, because he gave to God faithfully. He spent his life giving and serving others. In the book of 1 Corinthians, the Apostle Paul acknowledged the same thing when he wrote:

19 If only for this life we have hope in Christ, we are of all people most to be pitied. 1 Corinthians 15:19

In other words: it’s resurrection or bust. If this life is all that there is, then what did our brother sacrifice for? Why did he give up so much and serve so many people? It was all in his hope in Jesus and the resurrection. We know from the four eyewitness accounts, what we know in our Bibles as the Gospels of Matthew, Mark, Luke, John, that Jesus claimed to be the son of God, and as he promised Martha, that he was the resurrection and the life. And then he died a criminal’s death on a Roman cross. Three days later, his disciples began to claim that Jesus was raised from the dead, that they had seen him.

And if true, this would change everything, because on numerous occasions Jesus prophesied is own death and resurrection, and if someone can prophesy their own death and resurrection and then pull it off, I just go with whatever he says. Fifteen to twenty years later, the Apostle Paul wrote a letter to the church in Corinth, what we have in our New Testament as the book of 1 Corinthians. And in chapter 15, we have this incredible teaching that fleshes out our belief in the resurrection, all made possible because of what Jesus did.

3 For what I received I passed on to you as of first importance: that Christ died for our sins according to the Scriptures, 4 that he was buried, that he was raised on the third day according to the Scriptures, 5 and that he appeared to Cephas, and then to the Twelve. 6 After that, he appeared to more than five hundred of the brothers and sisters at the same time, most of whom are still living, though some have fallen asleep. 1 Corinthians 15:3-6

Paul is recording the central claim of Christianity: Jesus proved his divinity by dying on the cross and rising again, thereby validating everything he said about the resurrection. It’s why we have hope that we who believe in Jesus will see our brother again, that this is not the end. The key here is the list of witnesses: after his resurrection, Jesus appeared to Cephas (Peter), the twelve, then 500 at one time, many of whom were still alive fifteen to twenty years later. It’s like Paul is saying: fact-check me on this one. I know it’s an outrageous claim, but go and talk to the witnesses yourself.

If someone stood up today and started claiming: there were no attacks on 9/11, a plane never flew into the side of Pentagon, even though that was almost twenty years ago, there are thousands of witnesses here that were there and could contradict that. 1 Corinthians is written twenty years after the event of the resurrection, with witnesses still alive, who saw Jesus alive after his death and burial and resurrection. And because Jesus rose from the dead, everything changes!

54 When the perishable has been clothed with the imperishable, and the mortal with immortality, then the saying that is written will come true: “Death has been swallowed up in victory.”

It’s why we can rejoice today, even though we’re mourning the loss of our brother. Death is the great equalizer, death awaits us all, but Jesus has taken away it’s sting. Death is not all that there is, because Jesus conquered death, and through Jesus we will conquer death. That’s not saying that we’ll live forever in this life, but we’ll live forever in the next. For those of us who believe in Jesus, will see him again, at the resurrection at the last day, and we’ll be with him forever in heaven. And because of that, we can rejoice.

So for those of us left behind, let me give you a metaphor, a picture, that might be able to help. If you’ve had a child that’s grown up, you know the mixture of joy and mourning that comes when your child moves out of the house. Let’s say they’ve graduated high school, they’re eighteen and ready to conquer the world, and they’re going to move out because they’re going to college. In one sense you’re sad because they’re so dear to you, you’re going to miss seeing them every day, you’re going to miss them being in the house with you. But in another sense, you’re filled with pride and joy because of all the new experiences they’re having, how they’re succeeding in this world and making an impact. You can rejoice for them from afar while still grieving a little that they’re not with you every day.

That’s how we can think of our brother. He’s graduated from this life. He’s made it! While we grieve that he’s not with us here, that we can’t see him every day, he’s very much alive, and let me tell you, he’s having the time of his life. In fact, I would argue that our brother is more alive than any of us, because he’s with Jesus, where there will be no more pain, and no more tears, and no more sorrow. Hebrews 12 says this:

1 Therefore, since we are surrounded by such a great cloud of witnesses, let us throw off everything that hinders and the sin that so easily entangles. And let us run with perseverance the race marked out for us, 2 fixing our eyes on Jesus, the pioneer and perfecter of faith. Hebrews 12:1-2

The best way we can honor our brother is to follow and serve the Jesus that he followed. As for him, he’s now a part of that great cloud of witnesses, cheering us on in our own races. So to us who believe in Jesus, we’re not here today to say goodby to our brother. Instead, “we say, see you later, and save us a seat.”