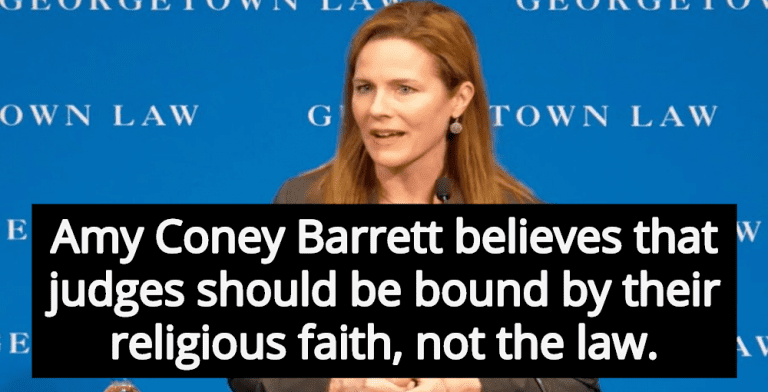 Amy Coney Barrett, a federal appellate court judge, has emerged as one of the front-runners to fill the Supreme Court seat left vacant by the death of Justice Ruth Bader Ginsburg, three sources told NBC News.

Amy Coney Barrett, a federal appeals court judge, has emerged as a front-runner to replace the late Supreme Court Justice Ruth Bader Ginsburg, according to people familiar with the discussions.

President Trump signaled Saturday morning that he would move to fill the vacancy on the high court “without delay,” raising the likelihood that the Senate will try to confirm a nominee before Election Day on Nov. 3 or during a lame-duck session.

Barrett is a dangerous religious extremist who believes her religious faith comes before the law, and claims that the Bible precedes the U.S. Constitution. She was previously confirmed for a seat on the U.S. Court of Appeals for the Seventh Circuit after a controversial and contentious Senate confirmation process.

Much of the concern about Barrett’s religious extremism is documented in a report from the Alliance for Justice (AFJ). According to the report, Barrett believes that “judges should be bound by their religious faith, not the law.”

As a judge, Barrett could be expected to put her personal beliefs ahead of the law. She wrote specifically about the duty of judges to put their faith above the law in an article entitled “Catholic Judges in Capital Cases.” Among other things, she strongly criticized Justice William Brennan’s statement about faith, in which he said that he took an oath to uphold the law, and that “there isn’t any obligation of our faith superior” to that oath. In response, Barrett wrote: “We do not defend this position as the proper response for a Catholic judge to take with respect to abortion or the death penalty.”

Amy Coney Barrett is a judicial nominee the likes of which we have rarely seen: a person who believes and has stated that judges can and should put their personal beliefs ahead of the law and Constitution when carrying out their duties. Specifically, Barrett has written that judges should put their religious faith ahead of the law in certain cases. She also has written that judges should not have to abide by precedent if they disagree with how past cases were decided. These views are so contrary to our system of democracy and justice that, in our view, they clearly disqualify her for the federal bench.

Barrett, who once clerked for the late U.S. Supreme Court Justice Antonin Scalia, is a dangerous Catholic extremist, and a vigorous opponent of a woman’s right to an abortion. She has written extensively on the need to dismantle Roe v. Wade. https://a561dd96e9ca3c38231edafc9f47bf8f.safeframe.googlesyndication.com/safeframe/1-0-37/html/container.html

Even more frightening, Barrett belongs to a secretive, cult like Christian group called People of Praise, where women are subordinate to men. The group is straight out of The Handmaid’s Tale.

Members of the group swear a lifelong oath of loyalty, called a covenant, to one another, and are assigned and are accountable to a personal adviser, called a “head” for men and a “handmaid” for women. The group teaches that husbands are the heads of their wives and should take authority over the family.

Now that is creepy.

Bottom line: Amy Coney Barrett is a dangerous religious extremist who believes a federal judge can subvert the U.S. Constitution and the laws of the United States in order to promote her own religious agenda. If given the chance, Barrett will replace secular law with conservative Catholic dogma and bigotry. As such, she has no business serving on the Supreme Court.

(Large portions of this post were previously published here.)