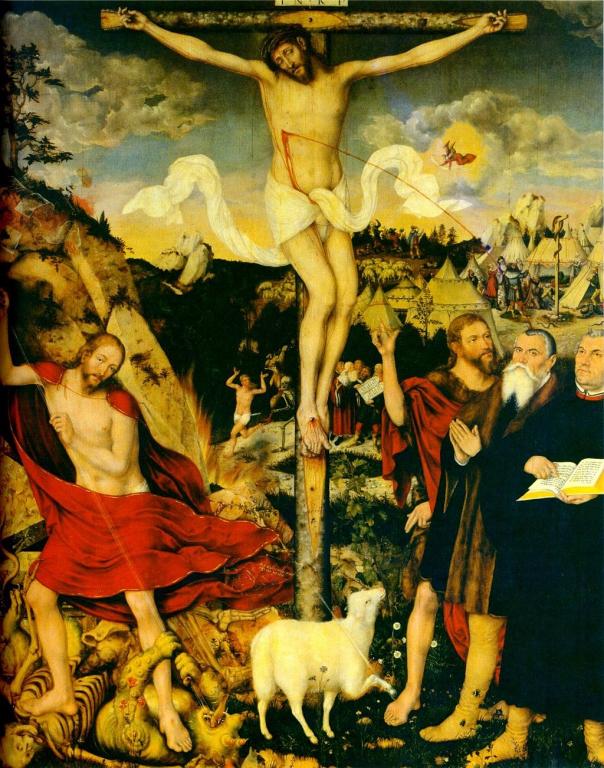 According to a new study, over half of Americans (52%) who describe themselves as “Christians”–including 41% of evangelicals–believe that salvation comes from doing good works, rather than from faith in the saving work of Christ.

And no wonder.  The doctrine of the atonement–that on the cross Christ bore our sins and endured the punishment that we deserve–is being minimized or even rejected by pastors and theologians.  Not just by theological liberals, but by some theologians who purport to be evangelicals, conservatives, or even Lutherans, even some who claim to be “radical Lutherans.”

Luther said that the doctrine of justification is the article upon which the church stands or falls.  Today justification–which includes the way we are justified, namely, by the death and resurrection of Christ–is no longer the heart of so many churches’ message.  So of course the church is falling.

His book concentrates on the Lutheran tradition, which has given us both some of the most profound explorations of Christ’s atonement and more lately the most harmful distortions, but he also explores the Biblical, patristic, and medieval contexts.  Kilcrease defends the classical formulations of the substitutionary atonement and offers probing critiques of the alternatives, from the “moderate revisionists” (Elert, Aulen, Wingren) who, while bringing out different facets of this rich doctrine (such as the “Christus Victor” teaching of how the cross redeems us from Satan) remain in the camp of historic orthodoxy, to the “radical revisionists” (Pannenberg, Jenson, Jungel) who depart from that orthodoxy.  His biggest target, though, is Gerhard Forde, the influential “radical Lutheran” whose Lutheranism, Kilcrease shows, is not nearly radical enough, insofar as he presumes to revise the Lutheran doctrine of the atonement.

To be sure, none of these theologians take a position as absurd and shallow as the feminist theologians who teach that if God the Father punished His son for the sins of other people, that would constitute “cosmic child abuse.”  Though that view has gained surprising currency, even among non-feminist theologians.  That punishing an innocent person is “unjust,” an act of human sacrifice, which would be unworthy of a righteous God, might have some validity, if God chose a random human being as a sacrificial victim.  But such a view forgets the doctrine of the Trinity, that God Himself is taking on the sins of the world–who else but God could do that?–and bearing His own wrath against sin.

Most of the more sophisticated objections to the classical doctrine of the Atonement treated here involve a drawing away from the concepts of human sin and God’s wrath.  They seek a model that is more humanistic (so to speak) with a more sentimentalized view of a kindly deity.

Forde asks, “why doesn’t God just forgive?”  He concludes that the Son of God did just forgive, throughout His earthly ministry.  And for this, Forde says, we killed him.   But when He rose from the dead, God vindicated Jesus and His approach, so that now human beings can have a new relationship with God, based not on their works but on His free forgiveness.

At least Forde, as well as some of these others, does see the cross as making a supreme difference and a cause of our salvation.  But he disapproves of the notion that Jesus bore our sins and received our punishment on the grounds that such a view privileges the Law.  It has God keeping track of our sins and punishing them, even though His Son takes those sins and that punishment.  This is Law.  Forde wants to privilege the Gospel from the outset.  But, as Kilcrease shows, Forde is misunderstanding the Law and its relationship to the Gospel.

Forde’s arguments also show a further weakness.  In dealing with Scriptural passages that teach the penal, substitutionary dimension of the atonement, he turns to the higher critical view of the Bible, maintaining that those texts are “later additions” to the Biblical documents.  He goes so far as to say that the words of institution of Holy Communion–“this is my blood of the covenant, which is poured out for many for the forgiveness of sins” (Matthew 26:28)–may be a later addition!  That kind of argument, in which he simply excludes Scriptural passages that undermine his thesis, is surely dishonest.

In any event, his claim that atonement passages are late additions is manifestly in error, ignoring the whole testimony of the Old Testament and the Levitical sacrificial system, which is foundational to the notion of atonement.  If Jesus is “the lamb of God who takes away the sin of the world” (John 1:29), He is the fulfillment of the Temple sacrifices–which are all about substitution, sin-bearing, death, redemption, and the covering of human sin with the blood of a spotless victim.

One would think that a “radical Lutheran” would have a radical commitment to Luther’s and the Lutheran confessors’ understanding of the atonement.  That the Second Person of the Trinity took into Himself the sins and the griefs of the entire world and bore the suffering that attends them in order to redeem us (Isaiah 53:4-6, the sedes doctrinae of the atonement, hardly a late addition) is far more radical than the other explanations.