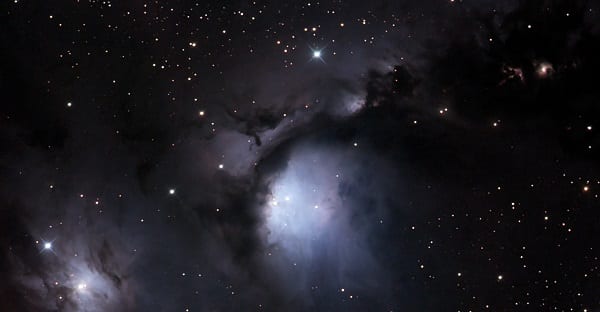 Hi and welcome back! I’ve always been interested in astronomy, and some of the news from that end of the science-o-sphere has been getting my attention of late. A recent paper in Science discusses how a team of astronomers have detected the precursors to known life in space — and in greater amounts than anybody previously thought possible. We are stardust indeed! Today, Lord Snow Presides over life finding a way — as it always does.

Another Bad Day to Be a Creationist.

Science News brings us the story today. Scientists trained their giant telescope on a dark cloud in the constellation Taurus and listened for star-song. And they heard something very, very intriguing!

Complex carbon-bearing molecules that could help explain how life got started have been identified in space for the first time.

These molecules, called polycyclic aromatic hydrocarbons, or PAHs, consist of several linked hexagonal rings of carbon with hydrogen atoms at the edges. Astronomers have suspected for decades that these molecules are abundant in space, but none had been directly spotted before.

And oh, I mean, sure, yes, we’ve found simpler carbon-bearing molecules out there. But this time, the team detected much bigger chains of them than usual.

They were even more excited to find way more of these molecules than anybody had ever thought possible. As astrochemist Brett McGuire said:

“If you filled the inside of your average compact car with [gas from] TMC-1, you’d have less than 10 molecules of each PAH we detected.”

But it was a lot more than the team expected. The cloud contains between 100,000 and one million times more PAHs than theoretical models predict it should. “It’s insane, that’s way too much,” McGuire says.

And y’all, this discovery turns out to be very important to our understanding of how life evolved from nonlife.

Why This Discovery is Important.

These PAH molecules turn out to be integral to a lot of theories about life’s distant origins. Carbon, of course, forms the very basis of life on Earth. The Font of All Knowledge tells us that every bit of life on Earth bases itself on carbon molecules somehow. That fact might derive from carbon’s sheer versatility — it can combine with a ton of other elements. We haven’t found much else that can combine so easily and readily.

Scientists used to think that these PAH molecules in space formed mostly from dead star-stuff. But the dark cloud McGuire’s team examined didn’t have enough “stellar ash” to create that crazy-high amount of PAHs. So it’s likely that these molecules formed in space somehow — but nobody’s sure exactly how that’d work yet.

For now, this discovery represents a very powerful confirmation of hypotheses scientists have been thinking about for almost 40 years.

(BTW: I love how the scientists involved in this discovery talk. In this story and the one to follow, check out how many excitement-words they use to describe their work. It’s beautiful to see humans so happy about discoveries.)

We Are Stardust — Really.

In a 2015 interview with National Geographic, an astrophysicist and his pathologist wife talked about a Joni Mitchell song, “Woodstock.” In the song, Mitchell sings, “We are stardust, we are golden.” And she was right, as it happens.

Everything we are and everything in the universe and on Earth originated from stardust, and it continually floats through us even today. It directly connects us to the universe, rebuilding our bodies over and again over our lifetimes.

Some of our star-stuff comes from the very beginning of the universe; some of it’s pretty recently fallen to Earth. And yet it all mixes within us and everything we encounter. It’s all constantly becoming part of our bodies, then leaving again to mix somewhere else. And that knowledge led this husband-and-wife team to realize something else:

We’re more like a pattern or a process. And it was the transience of the body and the flow of energy and matter needed to counter that impermanence that led us to explore our interconnectedness with the universe.

Even today, many thousands of tons of cosmic dust fall to our planet every year. Where do you reckon that stuff goes? Into the Earth, into its plants, into its animals. It all goes somewhere.

It doesn’t just sit around, either. Its elements — carbon, oxygen, iron, nickel, all the rest — get gobbled up.

Life always finds a way to capitalize on any windfall, no matter what it is.

Stardust: As Above, So Below.

Just as our bodies constantly absorb and shed star-stuff, building and discarding as needed, our minds and lives need to be constantly growing and changing too — building new ideas and paradigms, discarding stuff that maybe doesn’t serve our interests anymore.

With this recent discovery about carbon molecules in space, we’ve found that our connection to the universe is way deeper and more intense than we used to think. Life might go back a lot further in time than we thought, and its origin story might look a bit different than we thought.

And not one single bit of that connection or that origin story requires the existence of any gods to work. It’s staggering to imagine it all, the time involved, the sheer deathless eons marching past one after the next, and yet it happened, because here we are.

(At the same time, we’ve found not one aspect of this entire universe that could only be the handiwork of a god. We’ve never even found anything that might function as a god’s signature. Really, it’s the weirdest thing.)

Today, Lord Snow Presides over a deeply-connected golden universe made of stardust that sometimes, when it’s lucky, gains the ability to look back at itself in absolute wonderment.

NEXT UP: How Calvinism exacerbated a very disturbed young man’s emotional problems — and prevented him from finding real relief from them. See you tomorrow! <3

Please Support What I Do!

If you like what you see, I gratefully welcome your support. Please consider becoming one of my monthly patrons via Patreon with Roll to Disbelieve for as little as $1/month! My PayPal is captain_cassidy@yahoo.com (that’s an underscore in there) for one-time tips.

You can also support this blog at no extra cost to yourself by beginning your Amazon shopping trips with my affiliate link — and, of course, by liking and sharing my posts on social media!

This blog exists because of readers’ support, and I appreciate every single bit of it. Thank you. <3

Lord Snow Presides is our off-topic weekly chat series. Lord Snow was my very sweet white cat. He actually knew quite a bit. Though he’s passed on, he now presides over a suggested topic for the day. Of course, please feel free to chime in with anything on your mind: there’s no official topic on these days. We especially welcome pet pictures!