Free Will: Constrained, But Not Completely? 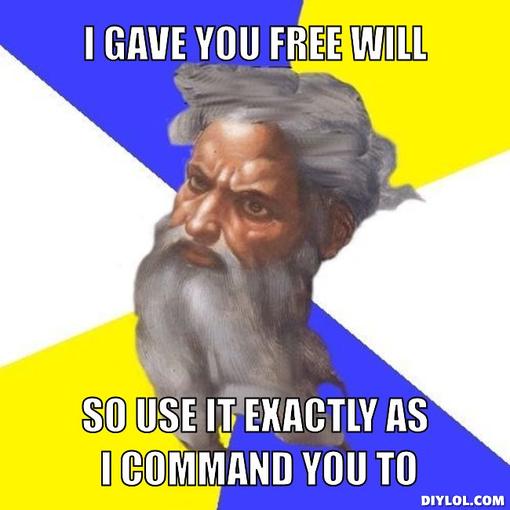 Here is a gratefully received guest post from Luke Breuer, a commenter here with very nuanced theistic tendencies. I asked him to put his thoughts on free will together both in light of my recent pieces arguing against Richard Carrier as well as the fact that we have argued over the years ourselves on this very topic. Rather than have his long comments get lost in the annals of DISQUS history, I think it is more useful to produce something we can either appreciate or criticise, and, if the latter, so that he can refine it accordingly.

I, for one, am chomping at the bit to say a few things on a number of his points!

Anyway, over to Luke:

Free Will: Constrained, but not completely?

Jonathan has asked me to comment on one of the first topics I ever discussed on his blog, back in 2013. At least 4% of my comments on Tippling mention something to do with free will. I’ve discussed it from many angles with many people. Back in the days of Skeptic Ink, Jonathan wasn’t my only opponent. Special thanks also goes to Void Walker, Andy Schueler, and The Thinker. If Jonathan’s kind words were right, I’ve learned something from this endeavor: “[Luke is] pretty much the only Christian I have spoken with who has a more nuanced view.” But you be the judge.

Like many [non-Calvinist] Christians, I started out pushing libertarian free will (LFW). However, after extensive arguing, I realized that I’m not so much arguing for LFW, but against the alternatives which seem to be on offer:

As eric recently pointed out, these can be seen as classes of [free] will, not individual models. I contend that no matter how you slice it, the claim that one of the above must be true is a metaphysical statement, rather than a scientific statement. This goes back to Karl Popper: if you cannot describe plausible phenomena that your hypothesis rules out, then it’s not science. My favorite example is the orbit of Mercury: Newtonian mechanics gets it right to within 0.008%/year. That’s some serious accuracy! And yet, it’s not quite right. For that, we need general relativity. My question is whether compatibilism (or the less common options—feel free to add more) is anywhere near as precise as Newtonian mechanics, so that it can be ruled out by plausible, “nearby” phenomena.

Popper held that better hypotheses were compatible with fewer possible phenomena: such hypotheses say far more about reality. If you have to jump all the way to an amorphous “soul” or “a conscious human with no brain activity” to falsify compatibilism, then you have a hypothesis that is compatible with the vast majority of remotely plausible evidence. Maybe that’s the best we can do, or maybe that’s a problem with compatibilism itself: if you can’t make the model sharper and have it still match the evidence, maybe it’s a bad model.https://0c37643cfee2e71aa1cc4be9893ce580.safeframe.googlesyndication.com/safeframe/1-0-37/html/container.html

As it turns out, there is a way to get the slightest of deviations from determinism. I will start where so many have before: in the heavens. On January 24, 1990, Japan launched its first lunar probe, the spacecraft Hiten. Sadly, it failed to inject with proper velocity and attained an apogee of 290,000 km, far short of the needed 476,000 km. Fortunately, NASA JPL scientists Edward Belbruno and James Miller were paying attention and realized that their theorized orbital maneuvers—shunned by JPL—could fix the problem. Instead of using the main engine to give a large, sustained burst, they planned out a series of thruster bursts, timed at precisely the right point, to get the spacecraft the rest of the way. It took five months instead of three days, but I doubt anybody complained. While non-compatibilist free will is often thought of as being able to fire the main engine and get to the desired orbital trajectory in no time flat, there are other options.

Similar math to that used to save Hiten is used on the Interplanetary Superhighway, which makes use of gravitational instabilities (read: indeterminisms) in the solar system to change spacecraft orbits with, in theory, down to infinitesimal thrust. I’m friends with two of the key innovators and found out that it’s called a ‘superhighway’ because there are specific on-ramps and off-ramps for the spacecraft. It also takes significantly longer to navigate via the Interplanetary Superhighway, than just packing a bunch of fuel on your spacecraft. However, if you want micro-satellites that can move far enough away from the Earth to escape its magnetic field, you can’t put that much fuel onboard. Anyhow, I want to emphasize that, in theory, infinitesimal thrust can be used to pick between multiple different trajectories as long as:

These are all critical components of constrained free will. (I’m indebted to Phil Rimmer, who preferred ‘constrained will’ to ‘free will’.) So often, any incompatibilist free will is understood as a spacecraft with infinite thrust: either you’re 100% free or 100% determined. This is a false dichotomy. The force of gravity is quite real in the solar system and quite powerful, but if you’re sufficiently clever, you can get where you want to go with almost no fuel. This suggests that even with laws of nature, which give incredibly fine structure to the universe, one can navigate within the noise, rather than merely be randomly buffeted. There is reason to believe that consciousness itself may lie on the edge of chaos, permitting the equivalent of butterfly effects to choose between meaningfully different trajectories. This might be that 0.008%/year deviation from present theory which I was looking for. But now we have a philosophical conundrum.

Now, it is fashionable in scientific discussions to say that you don’t understand a thing or process until you have a mechanism for it. eric, for example, recently requested a “self-consistent viable, testable definition” of free will. Ostensibly, he wants an experiment where, over and over again, you see the same kind of result. Then, in true Popperian fashion, you can say that while the set of possible phenomena are large, what you will actually see is a very narrow subset, described by some equation. The problem here is that eric—and plenty of others—are sneaking in a specific metaphysics of causation: all true causation takes the form of scientific laws, or something analogous in the particles themselves—and only the particles. Agents don’t cause, they are caused. Plus perhaps some pure randomness. Neither causation nor explanation are permitted to “bottom out” in the agent. The agent is a spacecraft with no ability to emit even infinitesimal thrust; if placed on the Interplanetary Superhighway, his/her/its course will ultimately be [impersonally] determined + possibly some randomness.

Note the [unintentional] irony: any mechanism for free will could thereby use to make free will unfree. Science helps us impose our will on nature and that includes human beings. One example of this is nudge theory; a more insidious example is the Hawthorne effect, where merely paying attention to factory workers makes them happier (that is: you don’t need to do anything to improve their conditions). There is much to learn about psychology, including the habits people get into which carve ruts so deep that Dr. Gregory House can convincingly repeat his mantra, “People don’t change.” And yet, build any system to try to constrain people and they’ll find a way to game it, to transgress the rules. If there’s any macro-scale evidence starkly against determinism, it’s this. Our most fundamental freedom is the ability to characterize our present situation, how we’re corralled, and then break out of it. Philosophy can be practical.https://0c37643cfee2e71aa1cc4be9893ce580.safeframe.googlesyndication.com/safeframe/1-0-37/html/container.html

There are many places to go from here but I’ll end with the following: the scientific fields which have most benefited from what is called ‘determinism’ are physics and chemistry. Jeffery Jay Lowder over at The Secular Outpost ties his definition of naturalism to the entities physicists and chemists study (as they construe the entities). And yet, physics and chemistry have been rather unhelpful for understanding consciousness and subjectivity—the loci of any free will which might exist. So, to expect the mind to work according to the kinds of mathematics used in physics and chemistry is unwarranted. There’s a long history of trying to fashion the human/social sciences in the image of the hard sciences and it hasn’t gone well. Maybe, as Shakespeare tells us in Hamlet, there are more things on heaven and earth, dear Tippling regulars, than are found in your philosophy.

Lest you think I intend to find refuge in some Christianism like “souls” or “the supernatural”: no. I have no idea what a “soul” would be and “the supernatural” is rarely defined with any precision. I side with Shakespeare: I think reality is far more interesting than most determinists would have you believe. Along with Lee Smolin, I’m even open to the possibility that mathematics itself doesn’t exhaust all possible patterns. (Temporal Naturalism) I simply dislike small, dogmatic boxes, noting that they can be epistemologically useful in an Ockham’s razor sort of way.

Arrested ‘shaman’ who breached the Capitol ‘had God on his side’

The Christian Infighting Over the Capitol Attack Has